Tihar or Dipawali is another biggest festival celebrated by Hindu People. Especially Nepalese people have grate rejoice on this occasion. As we know already that Dashain festival if the greatest festival celebrated by the Hindu people more than that Nepalese people have great religious significance of Dashain as weel as Tihar or Dipawali. According to the celebration Tihar is the second biggest Nepalese festival after Dashain festival and usually it is celebrated five days long as a National festival in Nepal but government has managed only three days holidays to celebrate. It is also celebrated in a great importance in Sikkim the region of Darjeeling and Kalimpong of India where there are the people of Nepalese communities form the beginning of human settlement.

Nepal government has a system of allocating holidays during Tihar festival. Generally there are three days holidays to the government employees or public post holder.

Tihar is also called Dipawali or Swanti or yamapanchak or Dewali by the people living at different place but all meant is Celebration of Tihar Festival.

Why Tihar is called festival of lights?

Tihar is called festival of lights because from its origin people started to celebrate it through lightening their Diya (a small bowl made by mud and containing thread and purified oil) inside and outside of their house at the evening and night time for the purpose of illuminate their houses at night.

How is Tihar or Dipawali Celebrated?

While participating to celebrate Tihar all the family members and friends returns back to their house from their working place of from outside where they have gone for higher education. Especially brother and sister are the main agent to take part in the celebration of Vaitika. To celebrate Tihar people decorate their house with varieties of lightening wire attached with automatic bulbs with the support of electricity supply. Boys and girls take part to paly Vaili and Deusi to collect Dan (donation) from different houses. In the past the collected money was used to have feast or picnic but now a days youths are very social and started to use the collected money for the developmental or social work which is very much positive.

What types of animals are worshipped in Tihar/Dipawali

Tihar is a great festival because it does not relate with the happiness of Human but also respect other creatures too as we worship crows, dogs, cows and Oxen too before the Vai is worshiped by their sisters. People make pattern on the floor of their living rooms, make garland or flowers (marigold) and tie at the door and windows too. Mainly Makhamali Flower (Velvety) is used by sisters to make garland to be worn by their brother on the day of Vaitika.

The first day of Tihar or Dipawali – Kaag Tihar

The first day of Tihar is known as Kaag (CROW) Tihar. On this day Birds Kaag and Ravans are worshipped by all the Nepalese or Hindu People. On this day in the morning women takes bath and prepare delicious and sweets and offer to the Kaag in the early morning or morning time. In Nepal there is a person named Ramesh Dulal known as crow man because he can collect hundreds of thousands cows together by making same sound as crow make for communication.

Crow is worshipped during Tihar because it is the animals can convey any kind of message to the different people living at different places by making different sound. We do not know what is going to happen or already had happened some incidents. People those who can understand the sound of crow into the real message and tell about good or bad message. So it has been worshipped as a message conveyers to the human. 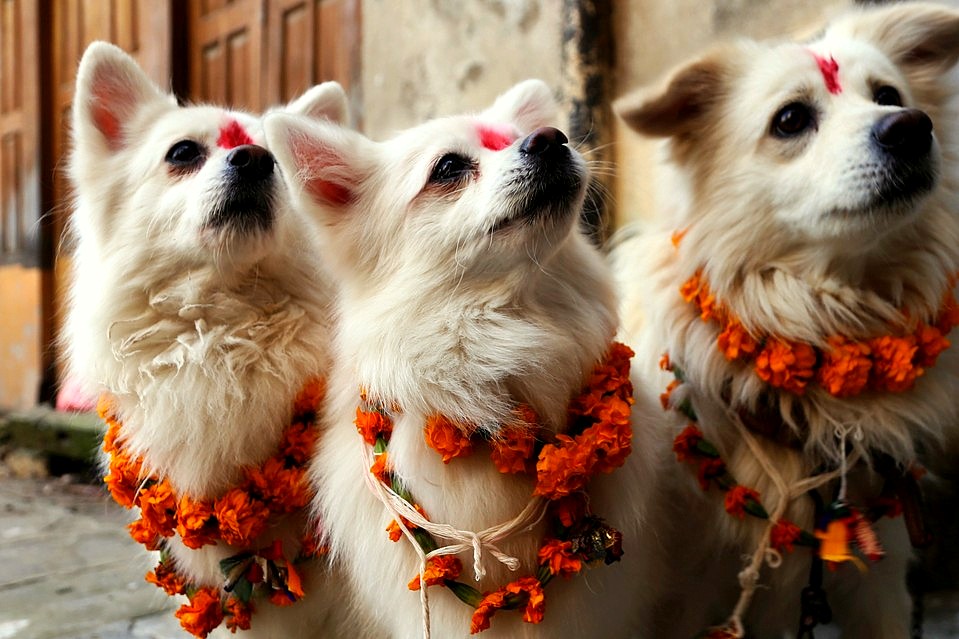 The second day is celebrated as Kukur Tihar or Dog Tihar. People have kept dog at their home as a member for the security of the house. Dog is loyal towards the master. It becomes ready to die but fights with all the enemies try to enter at Master`s house. So it is worshipped on the second day by offering garlands and tika too along with delicious food. All the street dogs are also worshipped and feed with delicious food.

Third day of Tihar is known as Gaai (cow) Tihar. Gaai is taken as incarnation of goddess laxmi by the Hindu people. In Nepal there is legal punishment for those people who sacrifice cow for meat and other purposes too. Cow signifies the prosperities and wealthy lives of the people according Hindu Religion.

On the third day each and every people those who have religious devotion takes bath and prepare garland with the use of Makhamali flower (marygold) and delicious food for the cow. All of the family gather together and put colorful tika and wear garland to the cow and tie a thread on the tail of cow which their priest tied on their warms as sacred thread (rakshyabandan) to get ret from ghost after death of people, which support to reach heaven after death.

On the same day, especially in the evening goddess laxmi is worshipped by lightening Diya or lamp/candles in the evening in each and every houses on the street, doorways (by making rangoli), windows, chhat and in the place of worship of laxmi in the corner of house.

After lightening the Diya and candles all girls and women take part to play Bhaili whole night and collect dan (donation) from the neighbors and other communities by singing vailini songs. On this day generally boys are not allowed to play Deusi so they play Deusi from next morning after worshipping Oxen Goru Pooja.

The Forth Day Tihar or Dipawali – Goru Tihar (Gobardhan pooja)

On the forth-day of Tihar. On this day also people prepare delicious food and garland to worship oxen of their house. If they do not have they go and take part in their neighborhood too.

People also observe gobardhan Pooja too on the same day. For this cow dung is taken to make Gobardhan Mountain to worship Gobardhan Pooja. Generally, cow dung is taken as representative of the mountain and worshipped. On the other hand, Newar people worship or perform Mha Puja (worship of self) on the whole night of Goru Tihar. This day is also taken as a new Nepal Sambat Calendar year.

The fifth day is the very much important day of all sister waited for a yearlong to be observed Vaai Tika. It is called Vaai Tika where there is no care of age for brother and sister all of them take part either elder or younger no matter. It is observed by sister applying sapta (seven colours) Tika or Tilak on the forehead of their brothers to ensure long, happy and prosperous life a head.

According to the legendry or History of Tihar or Dipawali Celebration, it is believed that, Yamaraj (god of death), visited to take the brother of Goddess Yamuna on the day of Vaaitika, Yamuna request Yamraj to wait for a while to worship her brother last time, so Yamaraj waited and watched all the activities done for the brother by a loving sister. Sister made garland of Makhamali, used mustard oil on the head and forehead and put Tika. And finally fed all delicious good. Brother also put tike to the sister and wanted gift to her. Brother asked sister to give gift to her and she asked Yamaraj to stay her brother with him until the oil get dry and makhamali flower get dry. Yamaraj gave words to the sister thinking it does not take much time but both of them oil and flower remain same for a long time and could not take her brother by the Yamraj. And told that on the day of Vaitika I won`t take life of any brother who puts tike, oil and garland of Makamali flower.

So that, all the sister want to keep their brother out from the mouth of death (Yamaraj). Sisters make round of their brother living place with dropping mustard oil to make a circle, use same oil on the head and forehead, use seven different colors, make Garland or Makhamali and Sayapatri flowers and put on their brothers. Brothers also give money or cloths as gift to their sister. Finally they take part to play Deusi and Vaili by singing different songs of Baliraja and other with dancing and so on.

History/Story of Tihar or Dipawali Celebration

According to the History of Tihar there are other stories as discussed in different books. So people have understood in the same ways through various books written about the Tihar festivals.

There are various stories about the celebrating Tihar festival. One of the known story behind the celebration of Tihar is related to Yama who was kept by Yamaraj the god of death and his sister Yamuna. Yam was away from his sister for a long time. Yamuna wanted to meet her brother at any cost and send various source to visit once. She went on sending crow, dog, and finally she went herself to see her brother. She worshipped him with different things like Mustard oil, dubo, makhamali flower, and seven colors tika or tilak. She made a circle of oil and Dubo (Cynodon Dactylon) and asked Yamraj not to go inside of the circle until it oil and dubo get dry and not to take her brother until the makhamali flower get dry in his neck where she put makahmali flower as a garland. Finally Yamraj waited but did not see oil, dubo and garland dry and returned back without taking life of her brother.

This is what we have found in different books a gather from aged people. If you need more information please do leave comments on the comments box below, we will try to provide relevant information.

Happy Tihar or Dipawali or Diwala to all of the people who celebrated this festivals and all human being who supported to continue this religious festival.

Previous 11 Rules to Make Our Better Life.
Next 16 Best ways of Celebrating Tihar or Dipawali

This page has hits